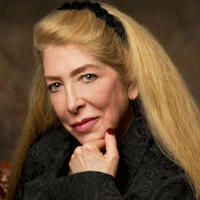 Not long after I learned that one of my most fiercely-adored poets, Lucie Brock-Broido, had died at the age of only 61, I read one of her recent poems in The New Yorker. During the course of reading it, my sense of time shifted from the comfortably temporal to something with no consoling limits. This is not an unusual reaction for me when I read Lucie’s poems, an instinctive recognition of something’s absolute rightness even as I feel immersed in the new and strange, the previously impossible.

I first felt this shock, of recognition mixed with unfamiliarity, when I read her debut collection A Hunger in my early twenties. I wanted, passionately, whatever she was having. She’s written just three books since, with another one, I’ve heard, to be published posthumously. Each one feels like a gift from a seer who has repeatedly gone to a place most of us can only vaguely picture, to bring back The News of what it is to be a body-bound soul.

It took a rare talent and, I think, a rare courage, to live as fully as Lucie did in the realm of the active imagination. Although she was deeply invested in her students and had (as I understand) deep, warm, loving relationships with her many friends, she was also a devotee of her art who formed her life around its practice in a way most of us are not built for, or willing or able to do.

You can, however, taste the strange, elemental fruit of this devotion when you read her poems. At the level she worked, imagination becomes intuition becomes a kind of mindfulness that enters into conversation with the timeless Now. You enter that conversation with her, and do not emerge unchanged.

See if you know what I’m talking about when you read the poem below. (And in a moment of aching coincidence, we’ve all just learned that giraffes have “quietly slipped onto the endangered list.” We can know Giraffe as we’ve never known Giraffe through Lucie’s poem, and maybe there is something we can do in the everyday world as well)

In another life, he was Caesar’s pet, perhaps a gift from Cleopatra
When she returned to Rome Her hair salty and sapphired
From bathing, the winged kohl around her eyes smudged
From heat. In another life, he was from Somalia
Where he spent hours watching clouds
In shapes of feral acrobats tipping along their tightropes
Spun of camels’ hair and jute.
His eyes were liquid, kind.
His lashes each as long as a hummingbird’s tongue.
His fetlocks puffed from galloping, his tail curled upward
From the joy of feeling fleet across the tinted grasslands
And the gold savannahs there.
Do you find me colorful as well?
Once, in another life in the Serengeti, he stretched his neck
To feed on the acacia twigs, mimosa, wild apricot.
He was gentle and his heart was as long
As a human’s arm.
At night, the others of his species hummed to each other across
The woodlands there; no one knows how, exactly, to this day,
But you can hear their fluted sounds.
Pliny the Elder wrote that,
In the circus of the hunting-theatres of ancient Greece,
He would be safe.
He was considered among the curiosities.
The House of the Medici found him novel,
And he pleased them mightily.
Do you find my story pleasing, too?
Even on the ship to France,
The sailors cut an oblong hole
Through the deck above the cargo hold to allow his head
To poke safely through.
When he arrived they dressed him in royal livery
To walk the seven hundred leggy kilometres
From Marseilles to Paris to be presented
To the Queen Who fed him rose petals from her hand.
At Thebes, in the tomb of the Valley of the Kings,
He was depicted in a hieroglyph, his forelegs gently tethered
By two slaves with a green monkey clinging to his neck like a child
Just along for the ride.
Do you think I have imagined this?
In a woodblock, once In an early-Netherlandish world,
He is shown with a crocodile, a unicorn, and a wobbly man
With a tail and prehensile feet.
Once, in Khartoum,
He bent his neck low enough to take milk from a pewter bowl
Held by a Sudanese farmer’s son. Centuries later,
In Piccadilly Circus, he was excluded from the Carrousel;
Everyone favored him, but no one could climb that high.
If you come back from the other world, to this—
The sky in Denmark, in its reticulated weathers, is inky
On most days in February now.
In the Copenhagen Zoo they only name the animals who grow
Old there, and, in this life, they called him
Marius but he was just a two-year-old.
In that moment was he looking at a gray, cobbled
Steeple in the middle distance of a dome
Or thinking of a time when his life was circled by a mane
Of warmth in a bright Numidian sun? His belly was full
And his eyes closed slightly His lashes casting long
Pink shadows on his face.
Do you think I made this up?
The attending veterinarian, Mads Bertelsen, shot him only once.
He needed badly to be culled—his genetic type and character
Replicated quite tidily enough already there, said Bengt Holst,
Director of the Zoo. On that same day,
After mid-noon tea and biscuits at their schools,
The Danish children were ushered to the habitat in the Gardens,
So they could learn firsthand About anatomy.
The keepers cut him open to reveal his neck, his tongue, his heart
(Which weighed just shy of twenty pounds).
The children, wound in down, bound in bright wool scarves
Which covered their open mouths with horizontal stripes,
Were mittened, wide-eyed, curious.
Do you find me curious as well?
When the Nordic dark settled in, so early,
The children, blanketed in white, began to fuss at sleep, and cry.
It would not snow that night.
What is it in me Makes me tell you of these sights.