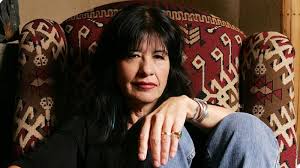 What is shared with all tribal nations in North America is the knowledge that the earth is a living being, and a belief in the power of language to create, to transform, and to establish change. 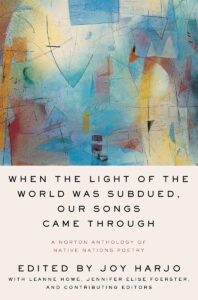 As we all continue to cope with extraordinarily hard times in the U.S., it matters deeply that we also continue to celebrate good news. It counts for a great deal that even as we choose not to turn away from darkness, we also keep our eyes and hearts turned to hope and to solutions. And so we are thrilled to share news of the publication of the first historically-comprehensive anthology of Native poetry, When the Light of the World Was Subdued, Our Songs Came Through, edited by our dear friend, United States Poet Laureate Joy Harjo. This groundbreaking volume contains the work of over 160 poets, representing almost 100 Native nations, honoring the vast array and depth of Indigenous literature.

Fitting for an anthology celebrating Native poetry in all its forms, including songs, oratory, and sacrament, the book opens with a blessing from Pulitzer Prize–winner N. Scott Momaday. It contains powerful introductions from contributing editors who represent the five geographically-organized sections, each containing information about the Nations that live there. The poetic styles and personal experiences are varied and multiplicitous, nodding to the sweep of the more than 573 federally recognized Indigenous tribal nations in the mainland United States who between them speak more than 150 Indigenous languages.

Each section begins with a poem from traditional oral literatures and closes with emerging poets. The poets span four centuries, from the 17th century to the present. The most recent poems in the anthology center tribal traditions and knowing within contemporized oratorical forms, attesting to the vibrant presence and practice of poetry within Indigenous communities. The poets range in age from high school students whose poems appeared in tribal and community newspapers in the late 1800s and early 1900s, to young spoken-word artists, to poet Louis Little Coon Oliver, whose first book of poems was published after he turned eighty years old. In a powerful redressing of the age-old American neglect of Indigenous voices along with Indigenous rights, the volume speaks to the ongoing vitality of a peoples who have endured nothing less than an American holocaust, who at contact with European invaders were estimated at over 112 million, and today are shockingly only one-half of one percent of the total population of the United States.

And yet, these lives, these voices, speak with an eloquence that injustice, neglect, and decimation can’t dim. Joy Harjo writes that, “it is the intent of the editors for you to open the door to each poem and hear a unique human voice speaking to you beyond, within, and alongside time.” And so they do.It is poetry that holds the songs of becoming, of change, of dreaming, and it is poetry we turn to when we travel those places of transformation, like birth, coming of age, marriage, accomplishments, and death. We sing our children, grandchildren, great-grandchildren: our human experience in time, into and through existence. — Joy Harjo

This extraordinary volume resonates so powerfully, even for those who are not members of the Indigenous nations, for reasons beyond the addressing of an age-old wrong and oversight (so crucial in itself). It also has to do with the overwhelming necessity of the collective Native view of our imperiled world. This view, that the earth is not a thing separate from us, waiting for our use, our management, our plunder, tells us instead that the land is us, we are the land: we are indivisible with our Mother.

We begin with the land. We emerge from the earth of our mother, and our bodies will be returned to earth. We are the land. We cannot own it, no matter any proclamation by paper state. We are literally the land, a planet. Our spirits inhabit this place. — Joy Harjo

Without this knowledge, and the full implementation of what this knowledge tells us, our planet simply will not survive as a hospitable home for humans, animals, plants, and the future. The evidence is all around us. 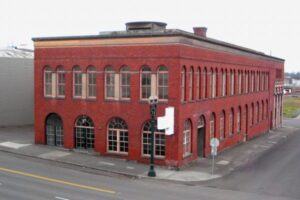 More good news has come to us recently in the form of further gains that indicate a turn to better forms of stewardship and the redressement of age-old wrongs. On July 16th of this year, our partner in the arts, The Native Arts and Cultures Foundation (NACF), a Native-led national organization committed to mobilizing Native artists, culture bearers, communities, and leaders to influence positive social, cultural, and environmental change, announced the transfer of ownership of the land and historic Yale Union building in Portland, Oregon, to NACF.  NACF accepted the special, historic property with an acknowledgement of the previous Native tribes and peoples who inhabited the land, and as a form of honor and respect for elders past and present.  “Together, the NACF board and staff believe that this free land and building transfer will set an example for recognizing the value of Native ownership of property in urban areas across the nation,” says NACF President/CEO Lulani Arquette.

The new national headquarters for NACF “will be called the Center for Native Arts and Cultures, and  will be a vibrant gathering place for Indigenous artists and local partnerships. It will provide space to present and exhibit, places to practice culture and make art, and areas for cultural ceremony and celebration. There will be opportunities for broad community learning, including workshops and seminars covering pertinent issues relative to decolonizing space, anti-racism, and environmental justice.”

Engaging the Senses Foundation’s CEO Mona Abadir, who has advised NACF for the last 10 years and serves as chair of NACF’s Leadership Council, says: “This welcome news has given all of us at ETSF much joy, along with a sense of hope that Indigenous cultures throughout the U.S. will begin (and continue) to receive the social and economic justice they so richly deserve. We hold the NACF in great esteem and value our wonderful partnership, which has led to many fruitful projects. Our most ambitious and recent project together, The Story of Everything (TSOE), is a creation story, exploration of the universe’s origins, and manifesto for protecting and honoring the earth that was first written by Hawai’i Poet Laureate Kealoha with generous support from NACF and is now being edited into a full-length film by ETSF. Through projects such as this, ETSF and NACF recognize and celebrate the gifts that Indigenous cultures offer to a world in profound need of their wisdom.”

In another welcome story, the ancestral homeland of the Esselen Tribe has been returned to its people after being landless for a quarter of a millennium. In late July, the Esselen Tribe of Monterey County, a nonprofit dedicated to preserving tribal heritage, finalized the purchase of a 1,200-acre ranch near Big Sur, along California’s north central coast, as part of a $4.5m acquisition that involved the state and an Oregon-based environmental group. The purchase will conserve old-growth redwoods and endangered wildlife such as the California condor and red-legged frog, as well as protect the Little Sur River, an important spawning stream for the imperiled steelhead trout. 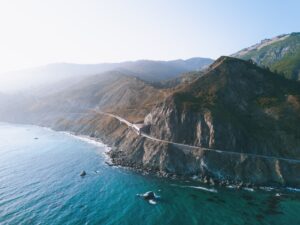 Tribal leaders say they’ll use the land for educational and cultural purposes, building a sweat lodge and traditional village in view of Pico Blanco peak, the center of the tribe’s origin story. Tom Little Bear Nason, chairman of the Esselen Tribe said the now 214-member Esselen tribe will share the land with other tribes originally from the area, including the Ohlone, the Amah Mutsun and the Rumsen people. “We are back after a 250-year absence,” said Nasan. “We’re the original stewards of the land. Now we’re returned.”

Let’s hope that these powerful acts are only the beginning of systematic and ongoing change in the arts, in land governance, and in the ushering in of a shared culture that is far more equitable and actively committed to the good of Mother Earth and all beings who live upon her.

Prayer for Words
My voice restore for me.
— Navajo

Here is the wind bending the reeds westward,
The patchwork of morning on gray moraine:

Had I words I could tell of origin,
Of God’s hands bloody with birth at first light,
Of my thin squeals in the heat of his breath,
Of the taste of being, the bitterness,
And scents of camas root and chokecherries.And, God, if my mute heart expresses me,
I am the rolling thunder and the bursts
Of torrents upon rock, the whispering
Of old leaves, the silence of deep canyons.
I am the rattle of mortality.I could tell of the splintered sun. I could
Articulate the night sky, had I words.
— N. Scott Momaday