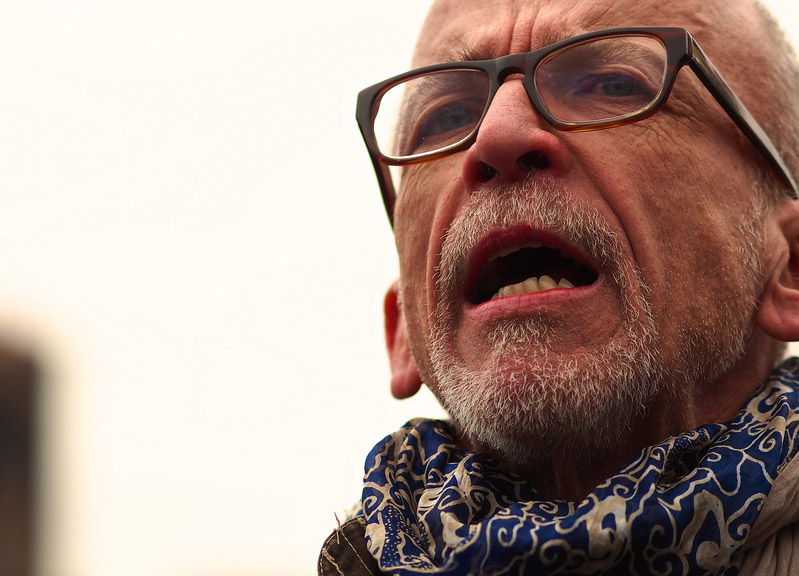 Today the Masons are auctioning
their discarded pomp: a trunk of turbans,
gemmed and ostrich-plumed, and operetta costumes
labeled inside the collar “Potentate”
and “Vizier.”
Here their chairs, blazoned
with the Masons’ sign, huddled
like convalescents, lean against one another

on the grass.
In a casket are rhinestoned poles
the hierophants carried in parades;
here’s a splendid golden staff some ranking officer waved,
topped with a golden pyramid and a tiny,
inquisitive sphinx.
No one’s worn this stuff
for years, and it doesn’t seem worth buying;
where would we put it? Still,

I want that staff.
I used to love
to go to the library — the smalltown brick refuge
of those with nothing to do, really,
‘Carnegie’ chiseled on the pediment
above columns that dwarfed an inconsequential street.

up to the desk again, I’d take
The Wonders of the World to the Reading Room
where Art and Industry met in the mural
on the dome.
The room smelled like two decades
before I was born, when the name
carved over the door meant something.

I never read the second section,

“Wonders of the Modern World”;
I loved the promise of my father’s blueprints,
the unfulfilled turquoise schemes,
but in the real structures
you could hardly imagine a future.

I wanted the density of history,
which I confused with the smell of the book:

Babylon’s ziggurat tropical with ferns,
engraved watercourses rippling;
the Colossus of Rhodes balanced
over the harbormouth on his immense ankles.

Athena filled one end of the Parthenon,
in an “artist’s reconstruction”,
like an adult in a dollhouse.

At Halicarnassus, Mausolus remembered himself
immensely, though in the book
there wasn’t even a sketch,
only a picture of huge fragments.

In the pyramid’s deep clockworks,
did the narrow tunnels mount toward
the eye of God? That was the year

photos were beamed back from space;
falling asleep I used to repeat a new word
to myself, telemetry, liking the way
it seemed to allude to something storied.

The earth was whorled marble,
at that distance.
Even the stuck-on porticoes
and collonades downtown were narrative,

somehow, but the buildings my father engineered
were without stories.
All I wanted
was something larger than our ordinary sadness —
greater not in scale but in context,
memorable, true to a proportioned,
subtle form.
Last year I knew a student,
a half mad boy who finally opened his arms

I think I know what he meant.

one of them, in his splendid get-up,
striding forward with the golden staff,
above his head Cheops’ beautiful shape —
a form we cannot separate
from the stories about the form,
even if we hardly know them,
even if it no longer signifies, if it only shines.