The Premiere of The Story of Everything 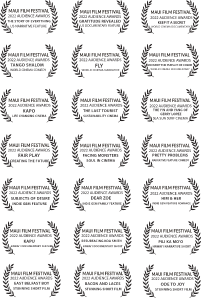 “We come from both positive and negative
from life and death
from evil and good
from heroes and monsters
from givers and takers and healers and murderers
from saints and sinners and losers and winners
from the elite to the beggars
from straight to gay
from conservative to liberal from fundamentalist to atheist
from black to brown to red to orange to yellow
to green to blue to indigo to violet to white
from big to small, and through it all, the one thing that remains the same,
no matter how crazy or different we may seem to each other is that
We are Cut from the Same Cloth.”

We celebrated the world-wide premiere of The Story of Everything film, Hawai’i Poet Laureate Kealoha’s epic multimedia exploration of the universe, the earth, and human consciousness, on the evening of July 8th at the Maui Film Festival! Held in MACC’s spacious outdoor amphitheater, the rapt crowd sat on on blankets, beach chairs, folding chairs, and bleachers to take in the entirety of the film.

Created as a gift for his son, The Story of Everything is Kealoha’s way of exploring humanity’s rich and diverse explanations for the origins of life. A founder of the famed Hawai‘i Slam and an MIT nuclear physics graduate, Kealoha says that, “The Story of Everything is my most important work and is the culmination of everything that I have learned throughout life. It took me half of my life to study the science behind this piece, half of my life to study the art of poetry and storytelling, and then about half a decade to actually create this work.” 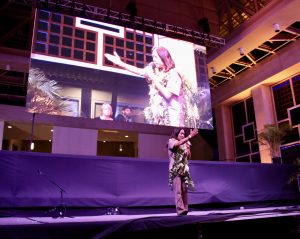 The magical evening had been long anticipated! The Story of Everything took root in Kealoha’s mind in 2011 when he learned he was going to be a new father and started thinking about all the knowledge he should pass on. How could he tell his child how everything began, making all the scientific details interesting and easy to understand? In 2014, Kealoha received support through the Native Arts and Cultures Foundation Pilot Community Inspiration Program to write an hour-long performance piece to help youth understand where we come from, using musicians, performers, and visual artists, and used this opportunity to flesh out his vision. Over the course of several years Engaging the Senses Foundation produced and directed The Story of Everything film, completing it in early 2022.

In the film, Kealoha and his talented cast of dancers and musicians, along with Kau‘i Kanaka’ole — a member of the illustrious Native Hawaiian Kanaka‘ole family whose expertise in hula and oli are transmitted through matrilineal succession and who began the evening with a chant — took us a journey through the Stars and the Big Bang, into our Solar System, and on to a deeper understanding of our Planet based on the beautiful Kumulipo creation story. We unfolded our minds to tales of human Evolution, travelled with our ancestors along the Migration path, and came to a place, in the film’s final scene, of both confronting the dangers inherent in a world impacted by rapid climate change, and gaining new hope about the real ways in which we can still cherish and protect our beautiful Earth. 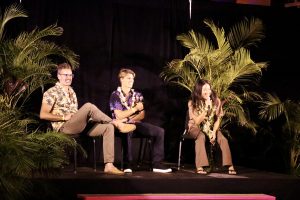 The evening’s showing was followed by a question-and-answer session where members of the audience asked searching and intelligent questions of Kealoha about The Story of Everything’s genesis, future plans, and impact on their hearts and minds.

The following day ETSF held a celebratory lunch for cast and creators to present cast members with framed portraits painted by Solomon Enos, who created the artwork and visual style for the film. It was a time of festivity, felllowship and great food, thanks to our friends at Hali’imaile General Store!

Our profound gratitude goes out to Kealoha, Kau‘i Kanaka‘ole, virtuoso and songwriter Taimane, best known for her inventive style of playing the ukulele, dancers Jamie Nakama, Jonathan Clarke Sypert, and Jory Horn, musicians Eli Clemens, Aaron Friedman, Jonathan Heraux, Sreedaran Sadagopan of the Quadraphonix, and Solomon Enos. Their talents and heartfelt energies brought to life a film and story that is itself a gift to the world.

ETSF’s special thanks and appreciation to Barry Rivers, Founder & Director of the Maui Film Festival, which has brought decades of cinema to Maui for island residents and guests in the true spirit of Aloha. Engaging the Senses Foundation is honored to receive his following announcement:

“We take great pride and pleasure to announce our 2022 Maui Film Festival Narrative Feature Audience Award goes to The Story of Everything for its sparkling originality, visual magnificence and mind-opening beauty, depth, and importance.

We are beyond psyched to congratulate the film’s ‘fire starter’ and visionary Kealoha, its producer Engaging the Senses Foundation, and the entire all-star ‘ohana, which built the amazing one-of-a-kind ‘experience’ and cinematic memory of a lifetime.” — Barry Rivers, Founder & Director of Maui Film Festival

Congratulations to Kealoha and to the entire cast and production team! Please stay tuned for future film showings, events, workshops and other educational opportunities to engage with The Story of Everything. 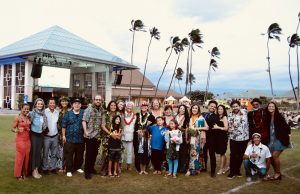 Back to What's New