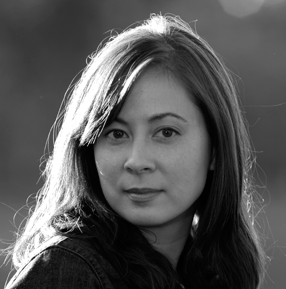 Too soon, perhaps, for fruit. And the broad branches,
ice-sheathed early, may bear none. But still the woman
waits, with her ladder and sack, for something to break.
A gold, a lengthening of light. For the greens to burst
into something not unlike flame: the pale fruit
blushing over weeks through the furred cleft creases:
a freckling of blood. Then the hot, sweet scent
of August rot, drawing wasps and birds and children
through the month. So much abundance, and the only cost
waiting. Looking at the tree, I almost expect the sound of bells,
a stone church, sheep in flocks. But no sound of bells,
no clarion call. The church is far down in the valley.
This tree should be a revered thing, placed at the ancient
heart of a temple. Instead, it is on a common
lot, beside a road, apartment buildings, a dog
sleeping in its yard.  The woman has come here
neither as master nor supplicant. She simply plans
to fill a plastic sack with whatever she can take:
the sweet meat giving under the press of a thumb,
covering what is its true fruit: the little pit, hard
and almond-brown that I’ve scooped out,
palmed and planted, but to no avail. A better gardener
could make demands of such a seed, could train a tree
for what desire anticipates. But here the tree grows
only for itself. And if it bears no fruit for the killing
frost, or if it flowers late because of a too-warm winter,
what debt am I owed? At whose feet should I lay
disappointment? Delight no more comforting
nor wounding than hunger. The tree traffics
in a singular astonishment, its gold tongues
lolling out a song so rich and sweet, the notes
are left to rot upon the pavement. Is this the only religion
left to us? Not one only of mortification or desire,
not one of suffering, succor, not even of pleasure.
The juice of summer coils in the cells. It is a faith
that may not come to more than waiting.
To insist on pleasure alone is a mark
of childishness. To believe only in denial
the fool’s prerogative. You hunger
because you hunger. And the tree calls to this.
But the fruit is real. I have eaten it. Have plucked
and washed and cut the weight, and stewed it
with sugar and lemon peel until the gold
ran rich and thick into jars. I have spooned it
over bread and meat. I have sucked it
from my husband’s fingers. I have watched it sour
in its pots until a mist of green bubbled up
for a crust. I have gathered and failed it, as the tree
for me both ripens and fallows. But now, it is perhaps
too soon for fruit. The winter this year was hard,
the air full of smokes, and do I know if spring
reached the valley in time? Who planted this tree?
How long has it stood here? How many more years
can such a thing remain? The woman reaches a hand
up into the branches, palm cupped, weighing
the leaf knots. She is looking to see
what instincts, what weathers still grow here.
She snakes her hand through the greening branches.
Up from the valley, come the golden tongues of bells.