Dana Gioia: Donation of a Life’s Work to Huntington Library 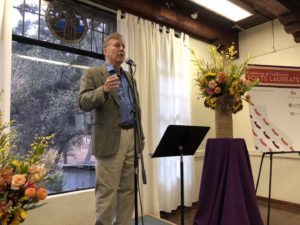 We are so pleased to share that our dear friend Dana Gioia, former Chairman of the National Endowment for the Arts (2003–09), California Poet Laureate (2015–19), and one of the most resonant voices for poetry in the U.S., has donated his years of letters, manuscripts, books, and libretti to the Huntington Library, Art Museum, and Botanical Gardens in Pasadena, CA where he once spent many pleasurable hours as a child with his family. https://www.huntington.org/news/huntington-acquires-papers-dana-gioia

Stanford University has accurately described Dana as, “a man of letters in the time-honored sense of the term, influencing our culture as a poet and essayist, but also as a translator, editor, anthologist, librettist, teacher, literary critic, and advocate for the arts.” His extensive decades-long correspondence has been sought by other institutions, but as a native Californian he chose to keep his papers in the state he loves. This donation follows upon the one Dana gave to Stanford University last year when he donated the archive of Story Line Press, which he co-founded.The Huntington Archive includes correspondence with many of the major poets and writers of the last several decades, including Elizabeth Bishop, Anthony Hecht, Richard Wilbur, Ray Bradbury, Rachel Hadas, Jane Hirshfield, William Maxwell, Thom Gunn, Edgar Bowers, Kay Ryan, Robert Conquest, Julia Alvarez, Thomas Disch, Cynthia Ozick,  Donald Davie, Anthony Burgess, John Cheever, J.V. Cunningham, and  musicians such as Dave Brubeck.

Karla Nielsen, curator of literary collections at The Huntington says, “In his correspondence, you see a writer who has been willing to engage the young and old, the esteemed and emergent—anyone who wants to critically discuss poetic form, contemporary audiences for poetry, and the importance of literary reading during decades when popular culture has become increasingly visual and attention spans have fractured.”

Amongst the projects we have been privileged to participate in with Dana, we remember with great joy our partnership on October 6th 2018 with the California Arts Council and the Los Angeles Department of Cultural Affairs/McGroarty Arts Center to sponsor Dana Gioia’s brainchild: a coming-together event of over 60 current and former local California poets laureate in a celebration of the power and beauty of the word. We’re delighted that artifacts from the event are included in the Huntington papers.

In interviews, Dana has often spoken about the ability of the arts to help lift individuals and communities. Dana’s desire to serve the underserved has informed all of the programs he has created on the federal and state level, which are consistently inclusive, with a focused yet broad outreach. As CA Poet Laureate he visited every single district in his state the first laureate ever to do so. His dedication to this vision mirrors Engaging the Senses Foundation’s commitment to vibrant inclusivity.  We believe that the difference these kinds of programs make to communities — and to the individuals within these communities who have the opportunity through them to being seen, heard, and valued — cannot be overstated. It was Dana’s intention, and ours, that the gathering of creatives at the Poets Laureate event might become a model for other state’s partnerships. The vital and historic day that ensued was the fulfillment of everything we had hoped.

The day-long occasion took place in the former residence of John McGroarty, California’s third poet laureate, in a hillside mansion that now serves as a community arts center. Several of the poets laureate moderated breakout sessions early in the day, during which the gathered poets shared best practices and lessons from their experiences as representatives of literacy for their cities, towns and districts. In the afternoon, along with all the regional poets laureate who attended, Dana Gioia, Robin Coste Lewis, former Los Angeles Poet Laureate, and Carol Muske-Dukes, former California Poet Laureate, took part in a special group reading that was open to the public. A large and enthusiastic crowd attended the event.Engaging the Senses Foundation filmed the event for posterity, with plans to include individual interviews and segments from the teaching sessions and reading event in our future documentary-in-production Be the Beauty.

We turn often to Dana’s poems, for joy, tenderness, consolation. As one of the most visionary poets and scholars of our generation, he always manages to speak to the heart of things. Although written years ago, this poem couldn’t speak more clearly to the needs and hope of our current, difficult moment:

Prayer
Echo of the clocktower, footstep
in the alleyway, sweep
of the wind sifting the leaves.
Jeweller of the spiderweb, connoisseur
of autumn’s opulence, blade of lightning
harvesting the sky.
Keeper of the small gate, choreographer
of entrances and exits, midnight
whisper traveling the wires.
Seducer, healer, deity or thief,
I will see you soon enough—
in the shadow of the rainfall,
in the brief violet darkening a sunset—
but until then I pray watch over him
as a mountain guards its covert ore
and the harsh falcon its flightless young.

Back to Uncategorized, What's New